Slothcoin is a peer-2-peer cryptocurrency created for having fun and in the mean while revolutionizing currencies. It is based on the idea of dogecoin and combined with some more advanced aspects like the sha3 encryption algorithm, which equals out the difference between nVidia and ATi cards and is more secure than sha256-like encryption algorithms. A total amount of 100,000,000,000 coins will be mined in the creation process, ensuring that there are enough coins for everyone and that Slothcoin will not become a comma-currency like Bitcoin. A small period of 100 blocks is used to let the network build up and prevent instamining. After that, the blockrewards will be 500,000 at the start and halving every 100,000 blocks, after 600,000 blocks there will be no reward left, but transaction fees. A block-time of 2,5 minutes ensures fast transactions while in the mean time reducing orphan rates that occur with block-times below 60 seconds. Kimoto's gravity well is implemented to adjust the difficulty every 2 blocks, this will prevent multipools from taking advantage of low difficulty and ensures that the coin does not get stuck in a high difficulty scenario.

Be the first one to reply to SlothCoin 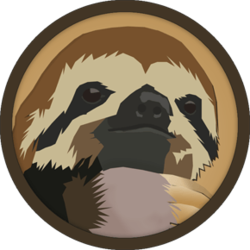