MISSION STATEMENT Our mission is to create a web wallet, phone wallet, and desktop wallets. We also aim to work on how to withdraw and deposit FIAT money through our platform.

STATEMENT TO THE PROBLEMS • Present payment systems such as banks are very complicated. • All information for the transactions is mainly accessible by banks and government agencies while unavailable to the general public.

SOLUTIONS • All information for the transaction is kept in a distributed network (ledger), which is provided with help of a distribution chain, called blockchain. • Untraceable and unlinkable transactions with the help of cryptonote.

ABOUT TRD COIN Forked from Masari, TRD coin is a secured decentralized currency. Bittrader will be like an automated web bank where business vendors can easily transact. The CryptoNote platform has been used in several cryptocurrencies and this algorithm is currently used for TRD coins.

We use the Ring Confidential Transactions (RingCT). This allows you to send TRD without being afraid that someone else can trace your transaction.

Apart from being based on CryptoNote technology, TRD uses a unique encrypted data transfer system that works on the principles of the blockchain.

Our goal is to further improve on the cryptonote protocol to provide a more secured, actively developed and well-maintained coin. One unique difference between TRD and other cryptos is the speed of transaction and increased security.

ABOUT THE CRYPTONOTE TECHNOLOGY CryptoNote is an open-source application layer protocol that serves as the underlying technology for several well-known, decentralized and privacy-oriented cryptocurrencies. Some of its basic principles lie in advanced cryptography, an egalitarian approach towards decentralization, and censorship-resistance.

FEATURES OF TRD COINS As a core cryptonote coin, we inherited the properties of the protocol and possess similar characteristics with other cryptocurrencies using the cyptonote platform.

Ring Signatures: The cyptonote technology uses the ring signature to anonymize the sender of a transaction. If ring signatures are used, all possible senders referenced in the transaction are equiprobable and there is no way to determine the exact private key used while signing.

The Ring CT technology not only hides the amount being sent but also hides the funds from the public blockchain only letting the recipient and the sender know how much was sent.

Classless Proof-Of-Work: TRD uses the CryptoNight hashing algorithm as its proof-of-work. This proof-of-work algorithm is designed to make both CPU and GPU mining roughly equally efficient and restrict ASIC mining.

Be the first one to reply to Bittrader 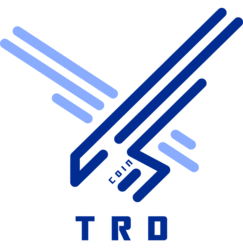