On April 13, the long-awaited God of Thunder finally made its arrival. Now, it’s time to learn more about THORChain and its $RUNE token. 26-points (3.17%) in the past month with the release of Ontology 2.0 and ONT ID.

A storm more than three years in the making has finally made landfall, and now the rains are pouring down. On Tuesday, April 13, THORChain, and its accompanying token RUNE, finally made their debuts.

More than 50,000 users logged onto the protocol in just a few hours after it debuted

No longer an ancient myth or simply a prophecy of a power to come, THORChain had finally arrived, stirring up big excitement among observers who had been waiting roughly three years for the God of Thunder’s arrival. More than 50,000 users logged onto the protocol in just a few hours after it debuted, with more coming in the weeks since.

That excitement was likely triggered by what THORChain technical lead Chad Barraford, told CoinDesk on the eve of the protocol’s launch was the fulfillment “of the initial promises of the white paper.”

So, what is THORChain exactly?

THORChain: Storming from chain to chain

Swap freely from one chain to another, one asset to another

THORChain is an automated market maker first outlined in a white paper roughly three years ago.

But just like its Norse-God namesake, THORChain offers a rare power that most other protocols simply cannot match. Instead of conjuring powerful bolts of lightning on command, however, THORChain can do something perhaps even more impressive: enable cross-chain trades.

With THORChain, users are able to “swap freely from one chain to another, one asset to another,” Barraford told CoinDesk. That means making cross-chain swaps with real currencies, rather than wrapped coins or other imitations, while still interacting on a decentralized AMM exchange, similar to many other popular DEXes.

So far, THORChain users can make trades with $BTC, $ETH, L$TC, $CH, and $BNB. Other tokens and more are expected to be added to the protocol in the near future. But unlike most other cross-chain platforms, THORChain allows users to trade the real assets of multiple unconnected blockchains rather than wrapped coins or other imitations.

Those cross-chain trades are enabled by $RUNE, the native token offered by THORChain.

Every time a trade happens on THORChain, the tokens being swapped are matched with an equal value of $RUNE. If, for example, a user wants to swap $ETH for $BTC, he or she would first trade their $ETH for $RUNE, then trade that $RUNE for an equivalent amount of $BTC. 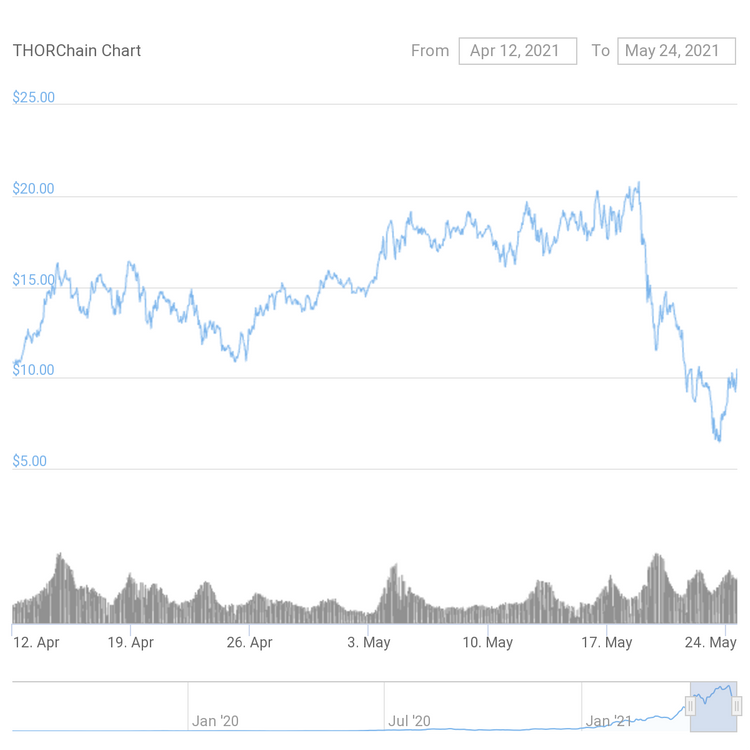 Cross-chain trades aren’t the only thing superpower that THORChain offers, however. It also provides an answer to a pair of issues that have plagued exchanges and the liquidity providers that fuel them: slippage and impermanent loss.

When it comes to slippage, THORCHain and $RUNE have looked to minimize its impact by allowing users to post an equal amount of any token supported by the platform and immediately start earning trading fees. This encourages more liquidity providers to hop into the pool and participate in the system, helping to decrease price variability.

So, now that you’ve gotten up to speed, are you ready to join the God of Thunder and get involved with cross-chain swaps on THORChain? If so, you can visit the THORCHAIN website to learn more, and access their desktop app. You can also follow THORChain on Medium or Twitter .

Or, if you want to participate in Flipside Crypto’s #bounty program, where you can get paid for answering crypto analytics queries, join Flipside Crypto's Discord , and make sure you subscribe to the weekly newsletter, the Bounty Brief!