Curve Finance is one of the most popular projects currently operating within the DeFi space. Having started off with stablecoin swapping functionality with low slippage, Curve has now been integrated into many different nooks and crannies of the DeFi ecosystem.

In this article, we will be taking an introductory look at Curve Finance in order to better understand all the hype around this newcomer in the DeFi space. In this analysis of Curve, 5 different sections will be covered, as follows:

Curve was originally conceived by Dr. Michael Egorov, a Russian physicist and entrepreneur who previously cofounded NuCypher , an encryption protocol for big data. NuCypher was seeded with $750,000 from YCombinator in 2016, later raising $15.1 million in two rounds in 2017 and 2018 led by Polychain , with participation from Fenbushi Capital , Compound VC , and others. 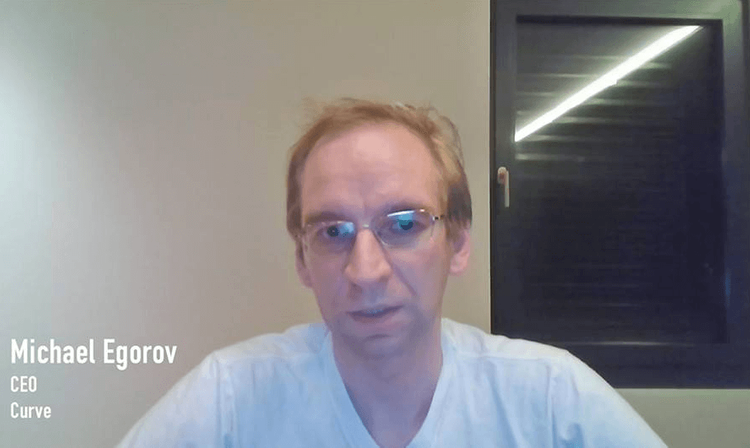 Egorov served as NuCypher’s CTO, and while developing the staking mechanism for NuCypher’s NU toke studied the concepts of liquid staking and bonding curves. Egorov developed a low-slippage trading algorithm that could run within an Ethereum smart contract and started working towards Curve, while NuCypher will be decentralized from genesis as it is now running its token generation event (TGE) in the form of the WorkLock , a novel stake-and-work-to-earn approach to issuing its first tokens.

Curve was launched in January 2020 and started grabbing headlines immediately due to its *composability+ or design fit with other permissionless components of the DeFi ecosystem. However, the biggest shock to the Crypto-Verse came with the surprising events of August 2020 when Curve decided to launch its governance token, CRVcodecode. Curve community user 0xc4ad , a newly created account, unilaterally spent $8,000 and deployed the open-source token and the CurveDAO contracts on the Ethereum mainnet, with the Curve team allegedly not involved and only learning about the feat through the user’s Twitter announcement and later officializing the launch after a few hours of reviewing the deployment. Definitely one of the most controversial DeFi launches ever.

Just 4 days after that episode, Curve would become one of the largest DeFi protocols, the third ever to receive over $1B in total value locked (TVL).

Curve is based on the StableSwap Whitepaper made by Egorov in November 2019. The issue Curve is meant to solve is the liquidity and price stability issues of stablecoins, particularly centralized finance (CeFi) protocols like USDT and USDC which have a central point of failure. Curve effortlessly automates the process of providing much-needed liquidity to stablecoins in an environment that is completely free of middlemen.

Curve achieves this aggregation of liquidity by removing the opportunity cost vis-a-vis simple HODLing, otherwise known as impermanent loss. The reason why these losses incur is beyond the scope of this article, but suffice it to say these types of losses are usually incurred in situations where prices are highly volatile, and for liquidity providers on DEXs these losses are their major financial risk. Because Curve focuses on stablecoins only, major fluctuations in price are a non-issue. 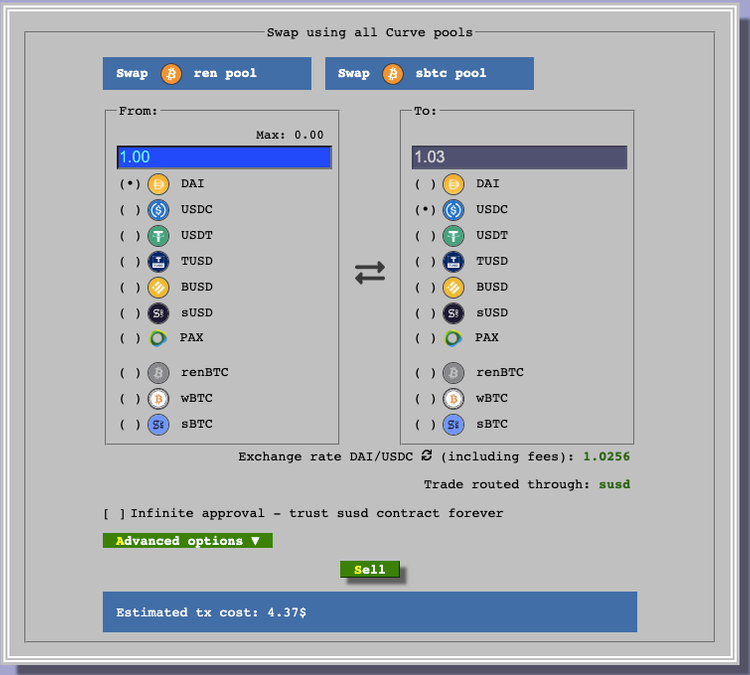 Currently, Curve supports seven stablecoins pegged to the US dollar (DAI , USDC , USDT , TUSD , BUSD , sUSD , PAX ) and three coins pegged to BTC (renBTC , wBTC , sBTC ). It is available as a Web app. Getting started on trading is simple and efficient, with support currently built-in for a variety of crypto wallets. However, if you’re looking to get started on Curve, I would highly recommend that you connect a Metamask wallet to the service (or a Torus , or Portis wallet) and play around the interface.

Curve claims to offer quick and secure trading with the lowest possible slippage, which is the difference between the quoted price and the execution price of the trade. Curve fees are only 0.04% per transaction on each of its pools, all of which goes to liquidity providers (LPs) sans admin fees. These fees may change in the future and may diverge across pools as the governance changes. 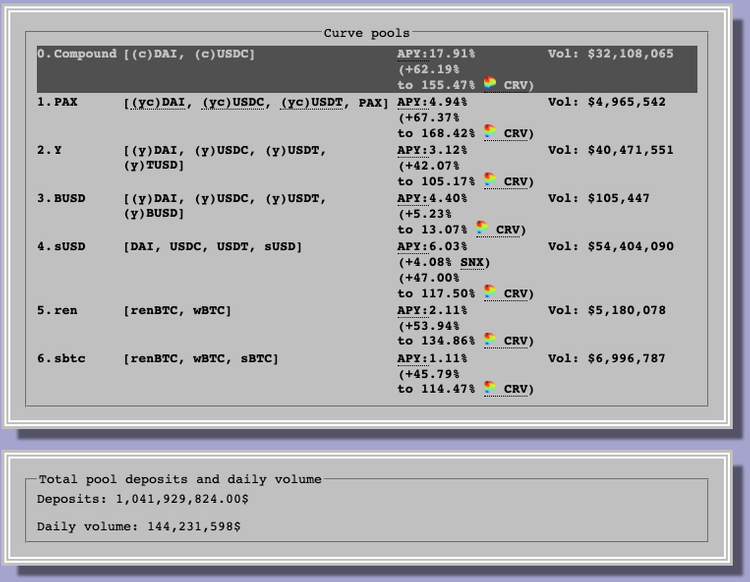 There are 7 pools in Curve, five for stablecoins, and 2 for tokenized Bitcoin or Bitcoin -on-Ethereum . All pools earn yield from trading fees, but on four of the pools, there’s further interest in lending as behind the scenes, these pools are using lending protocols (Compound and yearn.finance ) to maximize return for the LPs. For example, the user receives either a cToken (for the comp pool) or a yToken (for the pax, y, and busd pools). Other pools like susd and sbtc are non-lending pools but are incentivized by the partnership between Curve and Synthetix and receive rewards in SNX. The rencodecode pool is a more classic pool with renBTC and wBTC . When looking at a pool to invest, one needs to consider systemic risk and exposure to different assets and smart contracts.

To provide further incentives to liquidity, Curve created a token, CRV, which launched after the protocol had been live for 8 months. CRV is a governance token, an increasingly popular primitive in tokenomic models, particularly in the DeFi space. These types of tokens confer both economic and voting rights to its holders, and in many ways could be considered somewhat analogous to equities, even if they are categorized as utility tokens. They allow holders to participate in the “governance” of a protocol, that is, to vote on proposals according to the protocol’s governance rules. Truly decentralized protocols aim to submit all manners of issues to the community to decide. Issues like voting on improvement proposals, admins, grants, incentives, and possibly the voting mechanism itself. 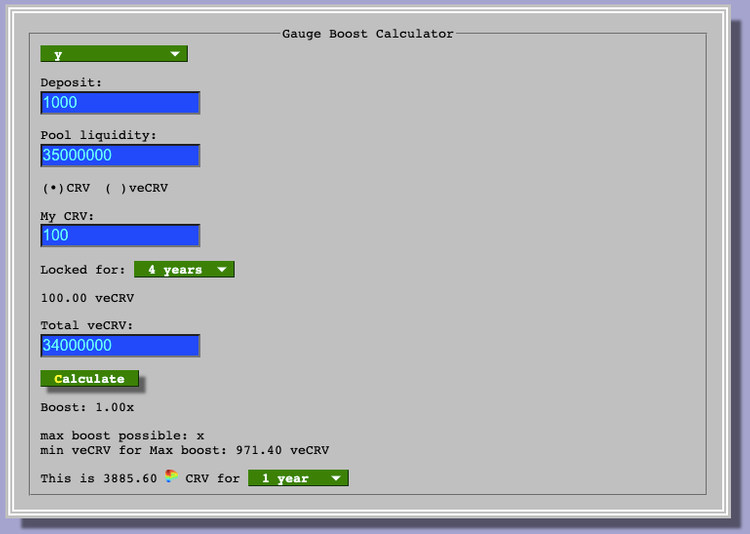 The CRV token allows user to participate in the Curve DAO, or decentralized autonomous organization, which will essentially administer the Curve protocol. Although the details have yet to be finalized about how much control the Curve DAO will have or when will control of the protocol transfer to the DAO, economic incentives like inflation and burning via buy-back of CRV tokens, which can be earned by staking counterparty LP tokens (received when providing liquidity to any of Curve pools) into the Curve DAO minter . Those CRV tokens can be further locked into the voting escrow contract to receive veCRVcodecode which boosts the rate at which CRV rewards are received by up to 2.5% and gives “votes” on the Curve DAO. Keep in mind lockup periods are irreversible and involve forfeiting the right to sell your CRV tokens. There are proposals to introduce an admin fee and distribute it among veCRV holders.

CRV is traded in secondary markets as well. According to CoinMarketCap , CRV is found with the most volume and liquidity on the following exchanges: 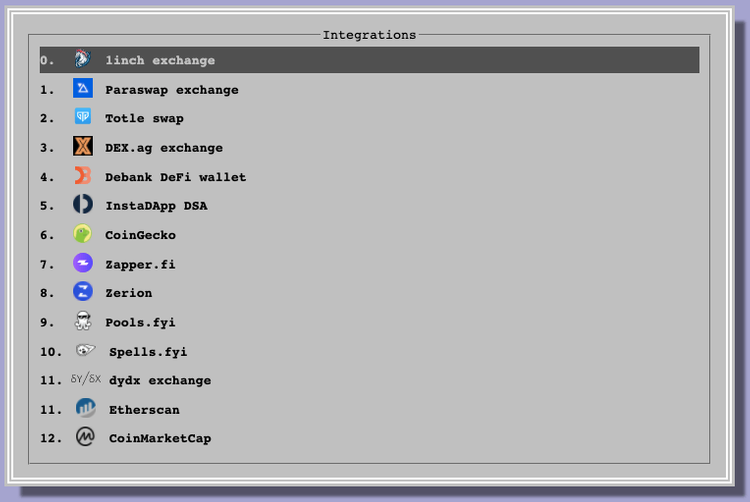 As with other DEXs, traders constitute the bulk of the user base, while the others within the ecosystem are liquidity providers and developers. Traders pay a nominal fee in order to swap between different tokens within the exchange, which in turn goes towards liquidity providers. Finally, developers work towards the integration of Curve with third-party projects, such as yearn.finance and Synthetix .

Many integrations have been built for Curve in a very short time. 1inch , Paraswap , Totle , DEX.ag , DeBank all see the utility in offering affordable stablecoin swaps to their users. This brings more incentives for liquidity, as it creates more volume, which added to existing incentives by Curve itself creates the perfect storm for network effects going forward.

The Curve community is mostly composed of LPs and CRV holders and is at present very focused on maximizing the benefits of governance for early LPs into Curve.

Curve’s focus on stablecoins allows it a degree of protection from the potential volatility that other DEXs are typically exposed to. Its simplicity and speed of development have quickly integrated it into the DeFi ecosystem in general, and in particular, connected it with YFI via the Curve Y pool, now the largest LP pool in all of DeFi. With decentralized governance, we can expect Curve to keep making DeFi a more reliable place for all involved.

Excited about Curve? Anything this article missed? Reply below to let me know!