Edit page
TL;DR: You can get a summary of this article in its last section
Nikolai Muchgian, MakerDAO co-founder and $DAI architect has died in San Juan, Puerto Rico at the age of 29. 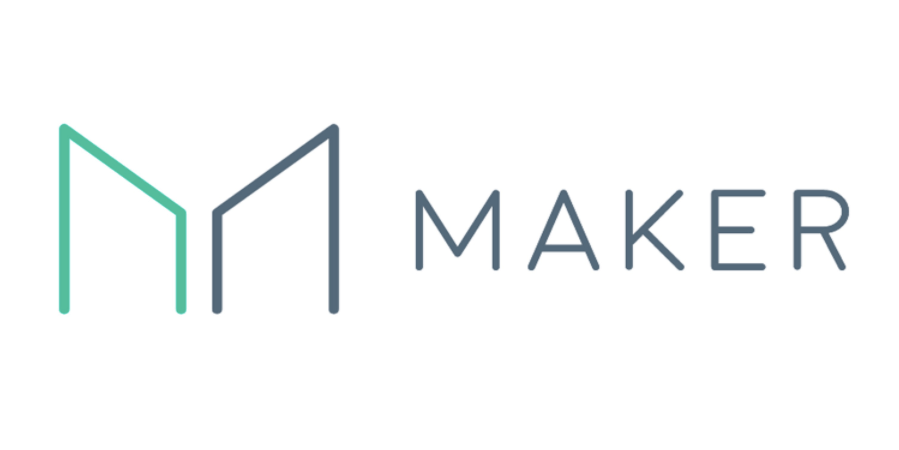 MakerDAO (often just Maker) is a credit protocol that mints the $DAI stablecoin, the Crypto-Verse’s first fully decentralized dollar-pegged asset, backed only by other crypto assets. $DAI and $MKR, the protocol’s governance token, are at the basis of so many DeFi applications that it is well worth understanding their functioning and significance.

In this article, we will be taking an introductory look at Maker in order to better understand. In this analysis of Maker, 5 different sections will be covered, as follows:

Maker was founded in 2015 by Rune Christensen, a Danish technology entrepreneur, as an open-source project to create a permissionless credit system that would mint a USD-pegged stablecoin. This system would operate on the Ethereum blockchain and the stablecoins minted by the protocol would be backed by the collateral deposited in the protocol’s smart contracts. 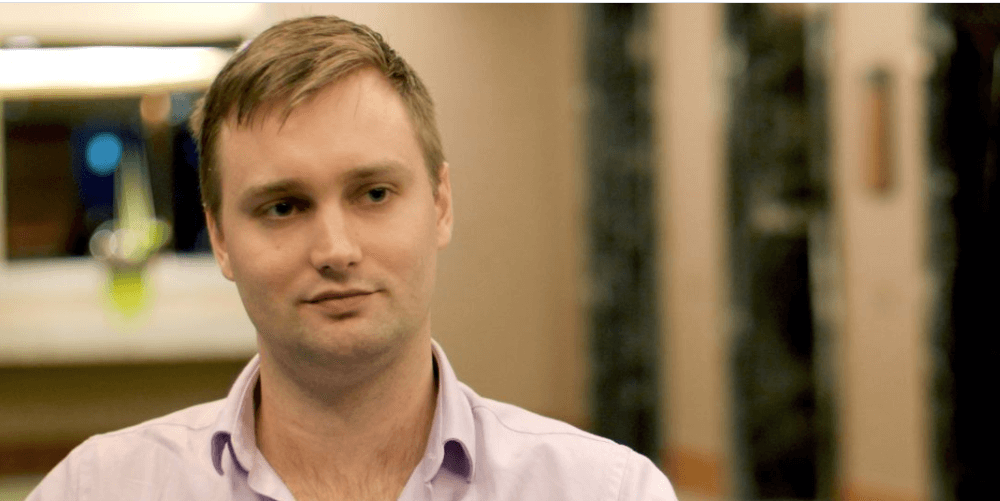 Starting in 2017, the Maker team published the original MakerDAO Whitepaper detailing the $DAI stablecoin system and released the first iteration of it. From that moment, the Maker Foundation, set up in Santa Cruz, California, started raising capital from VCs by selling $MKR. A first-round led by Andreessen Horowitz (a16z) and joined by Polychain, Fenbushi, and others raised $12M in late 2017. This was followed by $15M in late 2018 by a16z in solo. Meanwhile, $MKR was sold directly to the public in the now-defunct `mkr.market`. In late 2019, a $27.5M sale of $MKR was made to Paradigm.

In late 2019, the second version of DAI, called multi-collateral DAI was released as detailed in the Maker Protocol Whitepaper . The new protocol and revamped stablecoin encouraged migration of the original single-collateral DAI backers from the now-old system, renamed the original $DAI into SAI as it will be phased out periodically, and gave control over to “Maker governance”. In early 2020, the Maker team decided to move the intellectual property of both Maker and $DAI into a newly-established Dai Foundation, in Denmark. The Maker Foundation and Dai Foundation exist independently of each other and have different responsibilities. The Maker Foundation expects it will be disbanded once the MakerDAO or decentralized autonomous organization can control the protocol completely.

The purpose of Maker is to ensure a stable, transparent, and efficient mechanism to back a stablecoin and maintain a soft peg to the U.S. dollar in a decentralized and unbiased manner. 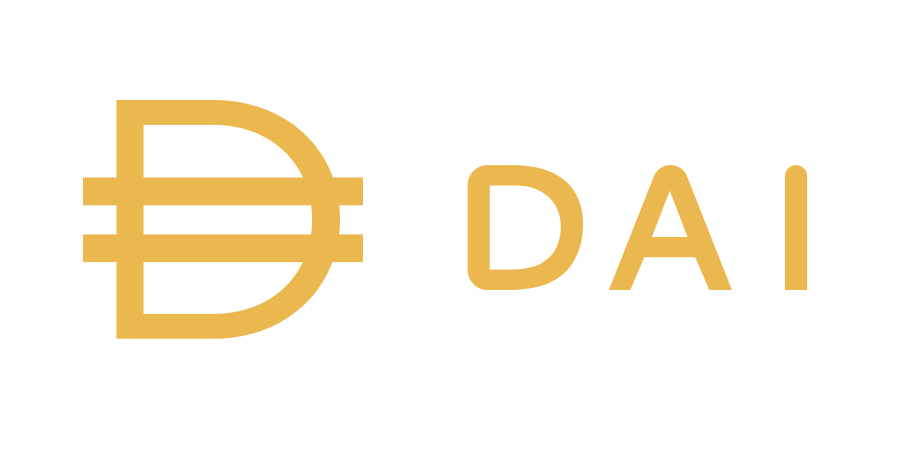 Before Maker, decentralized finance (DeFi) could not have come into existence as cryptocurrencies like $BTC and $ETH. Because of their volatility, these assets were seen as speculative instruments in and of themselves, which is why most Crypto-users trade their dollars for bitcoin. When considering the birth of lending protocols, yield balancers, and cross-chain interoperability, they only became economically viable once a single on-chain point-of-reference — a unit of account — was possible. Since a unit of account, the U.S. dollar, already exists in the world of centralized finance, the issue was how to bring it on-chain in a trustless manner.

The Maker team’s solution was to back the stablecoin, first with $ETH, and then with multiple collaterals. When collateral is deposited in the Maker smart contracts, it is locked by collateralized debt position (CDPs) — now called Vaults — and $DAI is issued in return based on their USD value, which in turn is obtained off-chain by trusted oracles that send the data on-chain. In essence, the $DAI is a loan against the crypto holdings of an individual.

Anyone can interact with the protocol and receive $DAI by depositing one of the accepted assets into a Vault. The $DAI debt incurs continuously accruing interest, called a stability fee. The stability fee must be paid back, in $MKR, when the $DAI is returned. Both the repaid $DAI and the $MKR fees are burnt or removed from circulation. For $MKR holders this represents an appreciation opportunity. The system constantly checks the value of the assets in the Vault against the borrowed $DAI. If the assets fall in value under the liquidation ratio, a pre-specified level of collateralization, then the Vault becomes subject to liquidation. A class of users called Keepers trigger the liquidation which sends the collateral to an open-market auction and applies a liquidation penalty on top of the outstanding $DAI. 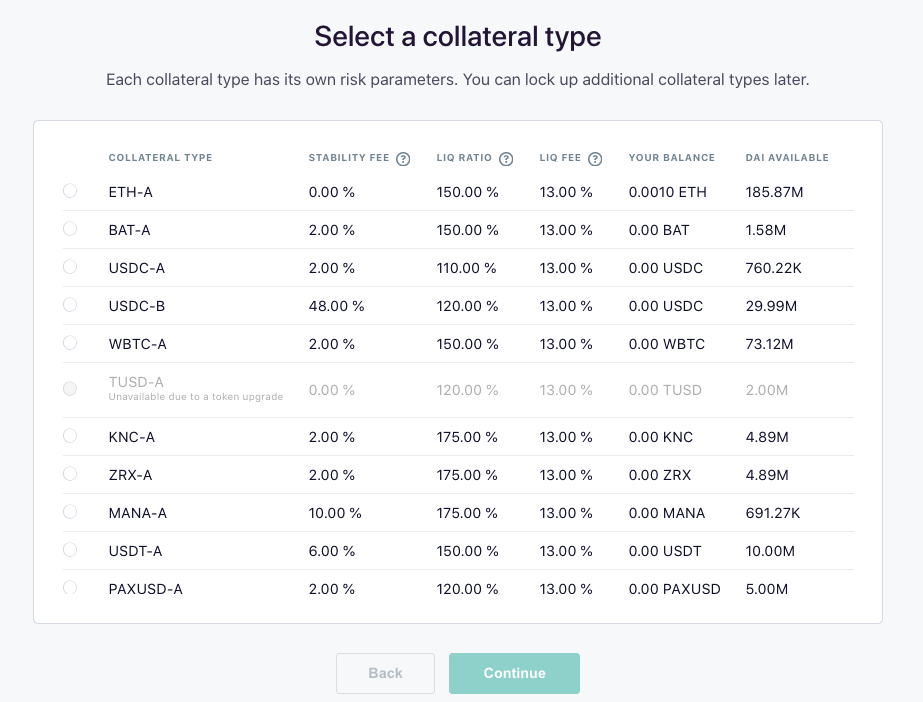 Stability fees, liquidation ratios, and liquidation penalties vary by Vault. For example, at present, $DAI can be borrowed for $ETH with up to 150% collateralization and 0% stability fee, which means that for each $99 worth of collateral one borrows 66 $DAI and doesn’t have to pay any fees unless the value of the ether falls below the 150% liquidation ratio, in which case a 13% liquidation penalty will be applied (`66 DAI * 1.13 = 74.58 DAI`) and the collateral will be auctioned off to pay for the 74.58 $DAI, the rest is returned to the depositor.

$MKR also acts as backup collateral in case the price of assets in Vaults drops too quickly. $MKR can be minted and sold to make up for the lack of collateral. This would dilute the $MKR holders, and it is meant to encourage good governance for them to avoid this failsafe situation.

A group of trusted individuals in MakerDAO also hold the settlement keys to the protocol, which can activate an emergency shutdown that eventually leads to the collateral being released to $DAI holders. This can be done by a community vote as well and is meant to protect the protocol from being wiped out by attacks on its components.

$MKR and $DAI are both traded in secondary markets .

Another interesting option with Maker is the DAI savings rate (DSR). This serves as a mechanism to influence the demand for $DAI. For the user, it means the option of a “savings account” in $DAI directly in the protocol, with the interest coming from stability fees. The DSR is variable, determined by Maker governance. To earn the DSR, the $DAI must be locked with Maker’s DSR contract.

Maker was conceived with a healthy and thriving ecosystem in mind. Its governance model, based around the MakerDAO or decentralized autonomous organization is revolutionary in its execution.

Maker supports the Oasis app , which provides a single interface to open Vaults and deposit $DAI in the DSR for savings. There’s also a limited volume of trading, on the pair $wETH/$DAI.

A program to aid developers in building to increase the adoption of $DAI, open new markets, or provide novel uses for the stablecoin is available and set to reopen on October 1, 2020. Grants between 5–50k $DAI can be allocated after an application with a 1-2 page clear explanation of the project and a budget. Maker follows up closely with their grantees during the development process and when co-promoting the project. 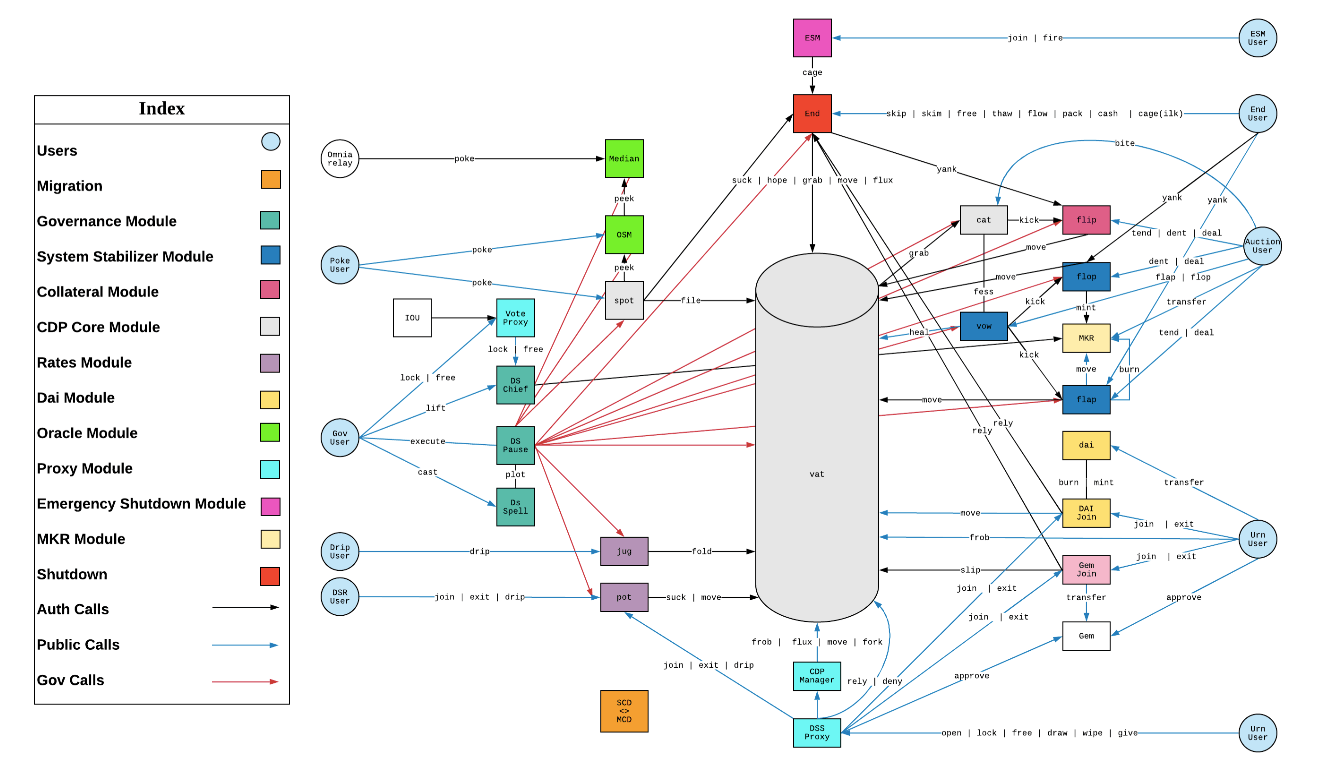 The Maker docs are an extremely detailed resource to understand the workings of the Maker protocol. They explain the architecture of the protocol and the functionality of each module, as well as how to migrate from SAI. The dynamics of auctions as well as the different user roles in the Maker protocol are also delved into. There’s a deep dive into the tooling needed to interact with and build on top of the Maker protocol (e.g. dai.js and pymaker), as well as annotations to the smart contracts, security notes, and a changelog.

For the visually inclined, there is a slide deck on the Maker protocol. For those wanting to learn, there are a number of tutorials and integration guides. The level of detail is a testament to their commitment in building a developer-first service.

Given that Maker is a community-governed protocol through MakerDAO, fostering a community and getting it to participate in governance as well as other roles is of paramount importance. To that end, a Maker community portal as rich as that for developers has been set up containing user guides and FAQs in several languages. You can volunteer to help Maker by providing community translations or organizing Meetups and hackathons. Microgrants are available to help out.

If you own or want to own some $MKR, there’s also a thorough guide on Governance in the portal.

Though not partners in the strictest sense, a win-win network effect has been established with the other top DeFi projects by total value locked (TVL). This is the consequence of what is often called composability, or the “money legos” properties of interoperable decentralized applications on the same network (Ethereum). The best optimization strategies for a yield farmer 👨🏻‍🌾 will involve the use of operations across Aave , Compound, Curve , and Yearn , most of whom will use Maker as an onboarding platform to $DAI at some point.

Maker is a reverberating accomplishment in the DeFi road to mass adoption. $DAI is the king of algorithmic DeFi stablecoins, with the Oasis $ETH/$DAI pair providing the epicenter of the action. With Maker standing with a TVL above $1B and no.2 in DeFi rankings, it is clear that $DAI has become an essential component of the DeFi infrastructure.