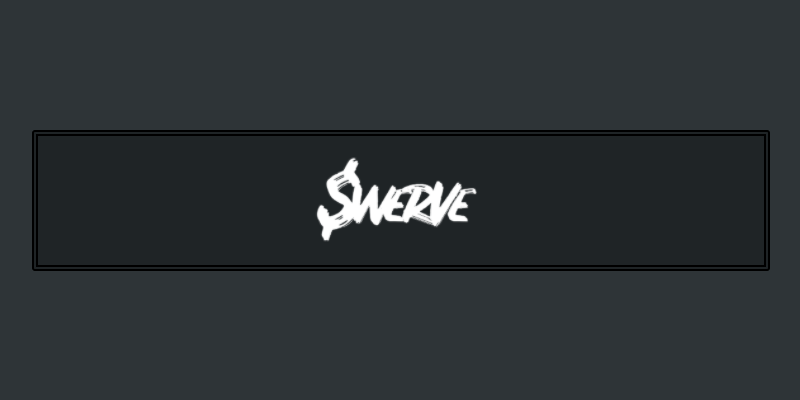 Swerve Finance has exploded in its short time in the DeFi space. The project is a fork of Curve , the now well-established stablecoin DEX. Swerve was launched to address certain issues of decentralization and control in Curve.

In this article, we will be looking at the basics behind Swerve Finance, and how it differs from the protocol it branched off from. If you are craving some background into stablecoin DEXs, check out our guide to Curve Finance .

Now, let’s move on to Swerve. We will be diving the analysis in 5 sections, as follows:

Swerve was launched by pseudonymous developer “John Deere”, to provide a 100% community-owned alternative to Curve to the decentralized finance (DeFi) community. In John Deere’s own words, Swerve distinguishes itself by what it is not:

There's no fake-out deployment, no questionable pre-mining, no founder controlling majority of the governance vote, no suspect team proposals, no 30% allocation to 'shareholders', no team allocation, no decades long distribution, none of it. — John Deere

The controversies are centered around the distribution of governance tokens, which confer voting and economic rights and have taken a role in DeFi somewhat akin to shares of stock in the world of centralized finance (CeFi). A school of thought is that these tokens should go to the community that sustains the protocol, in this case liquidity providers (LPs). LPs argue they take the most risk, often taking a chance on unaudited smart contracts to power low-liquidity markets that are volatile and often targets of manipulation tactics. LPs, particularly early LPs, argue they deserve the lion’s share of governance rights, and should get some of the upside of the protocol growing due to their early involvement. Given that decentralized governance is relatively new to the mainstream of DeFi, many teams opted for the more tried and tested route of raising money from *venture capitalists (VCs). VCs in the CeFi world often invest in a company in exchange for shares. Teams, particularly on early stage ventures, use the money to build the product, which usually means pay founders salaries and hire more engineers/designers, and look for *product-market fit (PMF), usually by iterating with the early users. However, a public Blockchain protocol cannot be owned, its codebase is open-source, and often it is open for many teams to build on it simultaneously. Many teams and VCs in DeFi have sidestepped these realities and sold or reserved a big chunk of their governance tokens to themselves, sometimes with vesting schedules and capitalization tables that mimic traditional VC startup funding. The risk is the community can throw its weight behind a team of developers that fork the project and launch it in a fair distribution, which usually means: 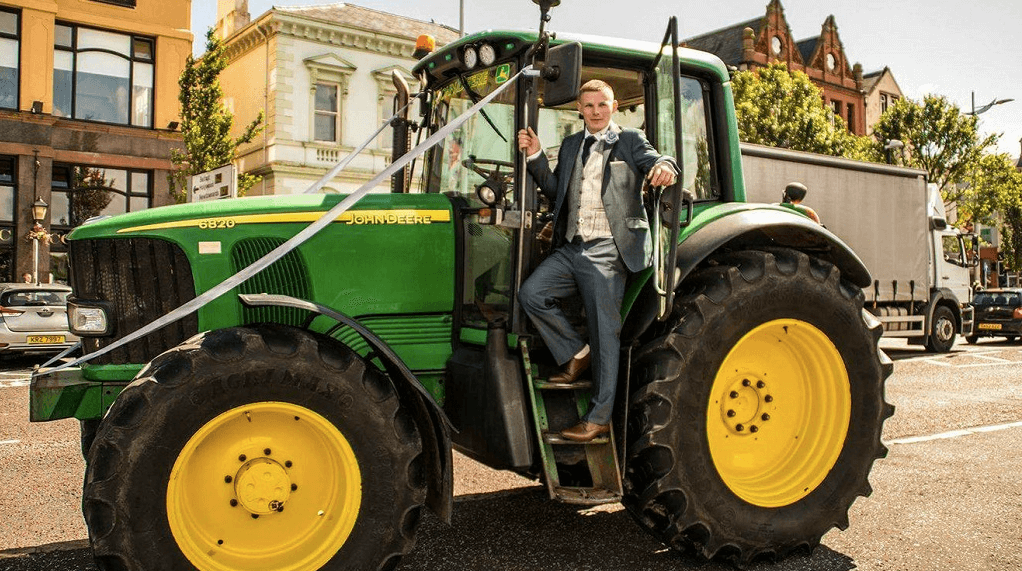 Swerve has promised that there will be no pre-vestings or allocations, and all tokens will eventually end up in the hands of the community of liquidity providers and users. A total of 33M governance tokens called $SWRV were minted, and 9M were distributed in the first two weeks, with Swerve reaching 400B in total value locked (TVL), and

passing $1B in market capitalization. Swerve is currently distributing 9M more tokens on a single pool called $swUSD and after 1 year this number will decrease to 3M for each of the following 5 years. John Deere is convinced that a community-governed protocol will be more resilient in the long-run. 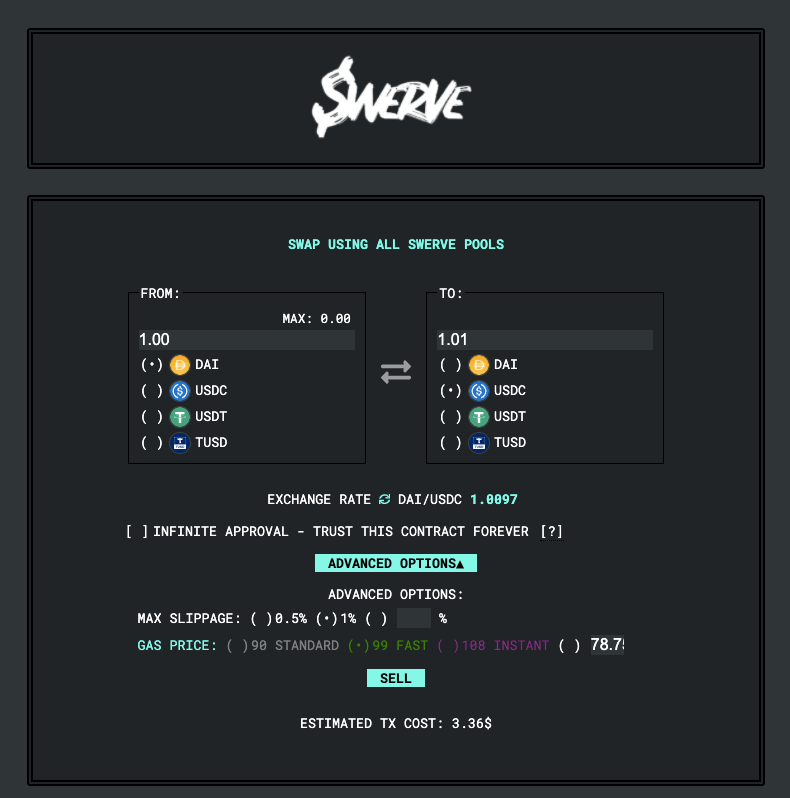 Swerve tries to fulfill the same purpose as Curve , which is to provide a decentralized exchange (DEX) with ultra-low slippage, focused only on stablecoins. Although Curve also offers pools with Bitcoin-based pairings, they run on similar smart contracts. The basic principle being that the assets on the pool should be hard-pegged, which allows Michael Egorov ’s implementation of bonding curves to offer low slippage when these assets are traded using the automated market maker (AMM) model. Once you add very-low trading fees (0.04%), the Curve/Swerve DEX model becomes a great tool to use or to integrate to any DeFi strategy or application.

The grand vision for Swerve involves iteration with the community as to where the protocol should go. Swerve started simple with an uncontroversial and well-liked stablecoin pool of $USDT, $USDC, $DAI, and $TUSD. The idea is to facilitate the transition into the protocol. Swerve did not resort to any “vampire mining” tactics either.

Anyone can lend liquidity to the Swerve swUSD pool by going to the deposit tab on Swerve’s web app, which is hosted on IPFS. You may add the pool assets in whatever proportion you have them, and Swerve will rebalance them for you. As a counterparty token to your deposit, you will receive what is commonly referred to as an LP token, in this case $ySWRV.

The $ySWRV token can be further staked to receive $SWRV, the governance token of the Swerve protocol. $SWRV allows users to participate in the Swerve DAO, but in order to receive voting power they have to lock up their $SWRV in a time-weighted contract or “voting escrow” which gives them $veSWRV, which can be used to vote on Swerve improvement proposals (SIPs) and in the future, on the allocation of $SWRV rewards amongst the different pools.

Besides currently being “farmable”, $SWRV is traded in secondary markets as well according to the SRWV page on CoinMarketCap ,

$SWRV is an ERC-20 token, so it can be stored in any wallet that accepts Ethereum custom contracts like MetaMask , Trust Wallet, Pillar , Torus, or Portis. 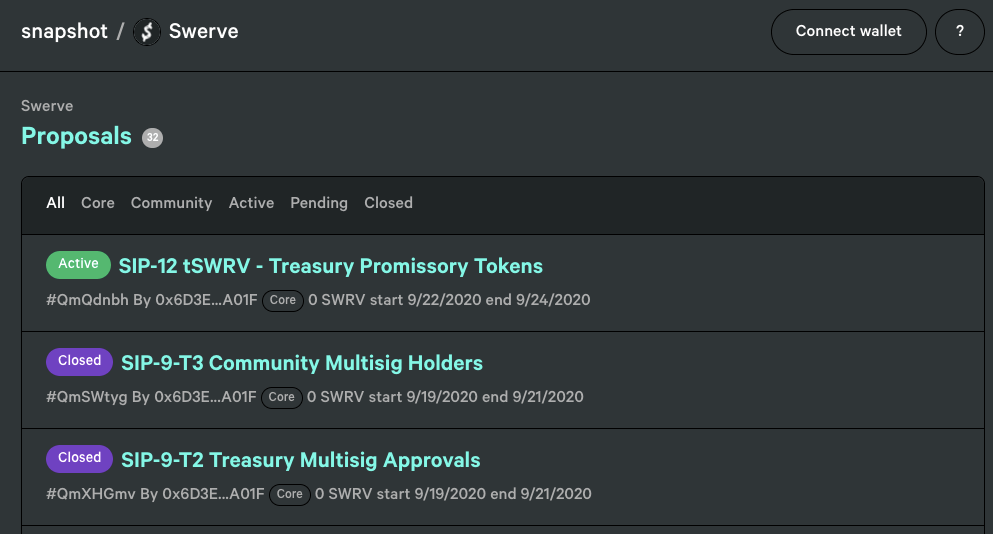 John Deere says the Swerve community aims to represent “all fair and honest farmers”. The most important members of the community are thus the LPs or yield farmers. Of course, traders and developers all form a part of a healthy ecosystem for any DEX. The Swerve DAO is already in control of the protocol contracts, and governance is live on the Swerve space @snapshot.page.

Since the decrease in $SWRV rewards, the TVL aim Swerve has fallen from its peak of $700M by >90% and the value of $SWRV has similarly gone down as it was dumped and yield farmers went to chase for rewards elsewhere. The core community, however, still represents around $45M in TVL and Swerve attracts a daily volume of ~$10M. Curve currently has $1.5V in TVL and ~$115M in daily volume. So Swerve is getting 3 times more volume per dollar locked.

The community is trying to maximize its advantages and already has voted on a number of SIPs. Some of their latest decisions:

Swerve is an interesting development. Albeit it currently enjoys much less functionality and integrations than its “parent” Curve, it enjoys a true and independent community. The project is in its early days of DAO-led development. Its pseudonymous founder took the name of a tractor company 🚜, so let us hope it really ends up being a reliable tool for the fair and honest farmers out there.

Excited about Swerve? Anything this article missed? Reply below to let me know!