TL;DR : You can get a summary of this article in its last section 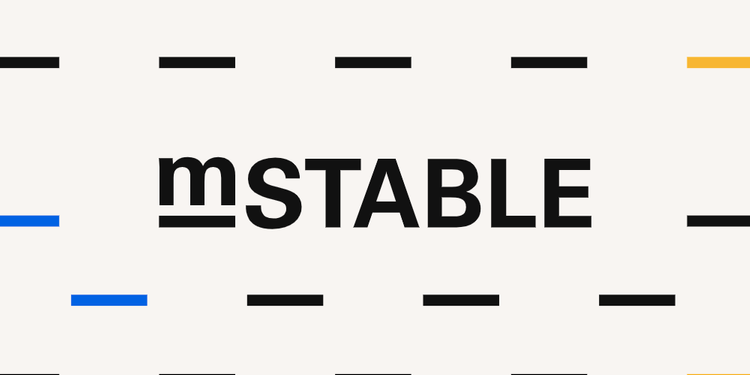 mStable is a protocol for strengthening stablecoins and digitized commodities, in the hope of creating a strong digital asset economy. mStable goal is for the protocol to reduce complexity and fragmentation by uniting stablecoins

This article will be a guide on the basics of mStable. We will learn the mechanism by which it unites stablecoins, lending, and swapping and how to participate in its rewards and governance.

Great, now onto mStable. We will review the protocol through the following five areas, and section our guide accordingly:

mStable was launched in May 2020 by James Simpson, Henrik Andersson, and Alex Scott. The team has been working on mStable since early 2019, when it developed a testnet MVP and raised a seed round.

The project’s team, Stability Labs, has received the backing of Alameda Research , Three Arrows Capital , and others. mStable itself is fully decentralized and mints and redeems its so-called mASSETS fully on-chain. The mStable app was created with the mStable SDK so web users could easily interact with the different functions of the protocol, namely “mint”, “swap”, “save”, and “earn”.

There are currently $28.8M of total value locked (TVL) in mStable which makes it one of the top 20 projects in decentralized finance (DeFi) by such a measure. The smart contracts were audited in early August by ConsenSys , which prepared an comprehensive audit report of mStable .

Stablecoins and other stable assets are a very important component of the DeFi ecosystem. Taking stablecoins for a start, the mStable team saw a number of competing versions of the same use case: provide an Ethereum -based cryptoasset that maintains its value on par with the U.S. dollar. They decided to create a basket of assets that accepts $ USDT , $ USDC , $ DAI , and $ TUSD . Each individual asset in the basket is called a bASSET , and collectively bASSETS . Whatever bASSET is deposited, the mStable protocol mints a mUSD token. All assets are supported at a 1:1 ratio. The thinking goes, since one $mUSD is not backed by a single protocol or provider, holding $mUSD as a whole is safer than holding any one particular bASSET.

In practice, bASSETS are not exactly on-peg all the time. Creating a basket is then not particularly attractive for holders of above-peg assets, and particularly attractive for holders of below-peg assets. At the time of writing, this could be seen in the share of $DAI in the basket, given how prone that particular asset is to be above-peg. There are, however, advantages to minting $mUSD beyond the risk of having a single point of failure.

For starters, there is the mStable save function which allows you to deposit your $mUSD and earn yield from the underlying assets being lent through Compound and Aave . This yield is native to $mUSD and also includes the trading fees from the mStable platform. 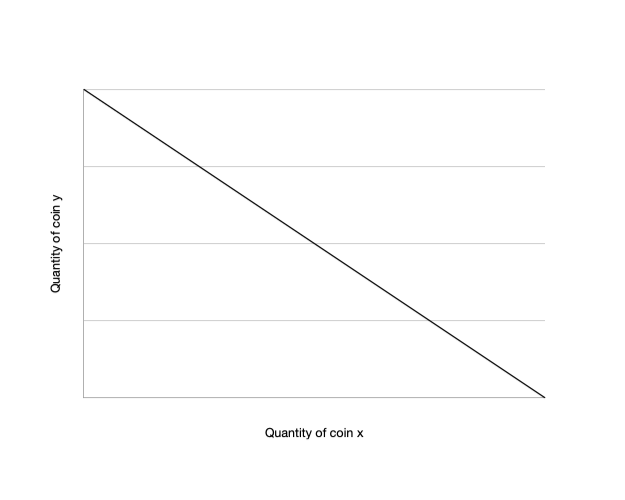 mStable provides a zero-slippage swap functionality through its constant sum automated market maker*. Instead of the typical *constant product x * y = k formula that powers an automated market maker (AMM) like Uniswap , the formula used by mStable is x + y = k . At any amount of x or y the price is stable as the slope of the bonding curve is constant. This assumption naturally proves quite useful for arbitrageurs, especially since mStable allows you to withdraw your $mUSD in any bASSET of your choice. In order to protect the system, however, each basket has a set of maximum weights per bASSET, and no swaps, minting, or redemptions are allowed if it would cause any bASSET to exceed its maximum weight as a result. In this case, a withdrawal of the basket at its underlying weights can be made, which the system calls multi-redemption .

To complement the system of minting and redeeming $mUSD, and to encourage the health of the ecosystem and the development of associated DeFi applications, mStable has launched a “governance token” named Meta , with the symbol MTA .

The main idea behind $MTA is to protect the protocol against failure by one of the underlying bASSETS. Holders of MTA help ensure the mStable protocol. Should a bASSET fail, the system would be under-collateralized, and $MTA would be issued and sold until the system is re-collateralized. The exact mechanics of this insurance have not yet been launched but are expected in the next phase of mStable’s development. 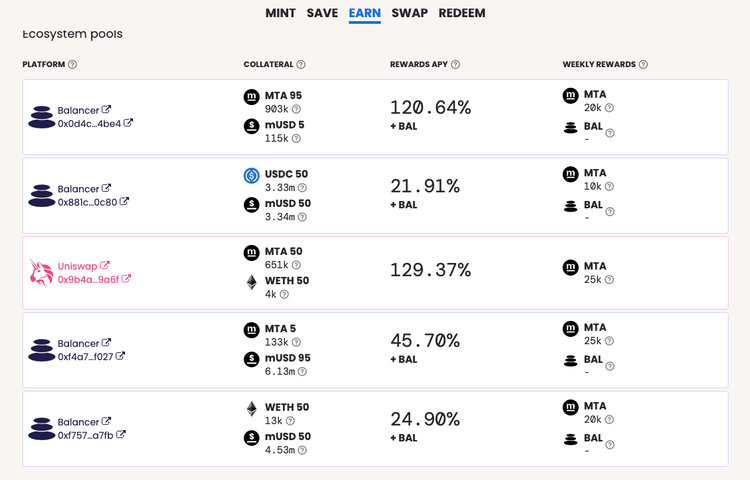 To farm $MTA, you must provide liquidity to one of the eligible pools in Uniswap or Balancer and bringing your LP tokens to the mStable app farms to be found on earn . Some of these pools contain $MTA itself (add $MTA liquidity to receive more $MTA — so-called “death pools”). The Balancer pools are also eligible to earn $ BAL , the Balancer governance token according to the rules of the Balancer liquidity mining program. The mStable “earn” page provides a comprehensive way to track all different $MTA rewards and associated annualized percentage yield (APY) of each. The yield is based on $MTA rewards — yield on other rewards (like $BAL), pool fees, and impermanent loss (IL) are excluded from the calculation. Currently, rewards are at 100k $MTA/week ($239,000/week). Rewards are increasing monthly for a year then they will start decreasing for the next 4 years. 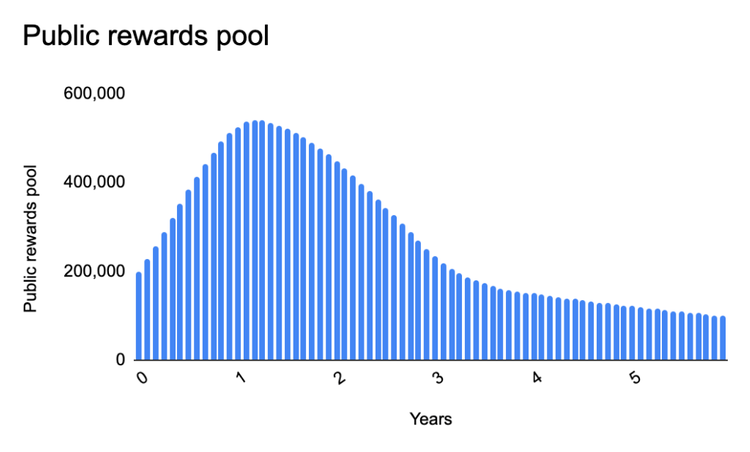 Besides farming $ MTA , users can buy the token at secondary markets. Currently, according to CoinMarketCap data on $MTA , it is found with most liquidity and volume in:

Since $MTA is an ERC-20 standard token minted on Ethereum , it can be held in any wallet that supports custom contracts like MetaMask , Trust Wallet , Pillar , Torus , and Portis . Most of these wallets can be secured with a hardware wallet like a Ledger .

The mStable community consists of $mUSD users, liquidity providers (LPs) in mStable farms, arbitrageurs/traders, $MTA hodl-ers, and other developers who make suggestions or want to build on top of mStable or use its SDK.

In what has become a common DeFi governance formula, mStable recommends the vector of community action to go through the following hurdles: 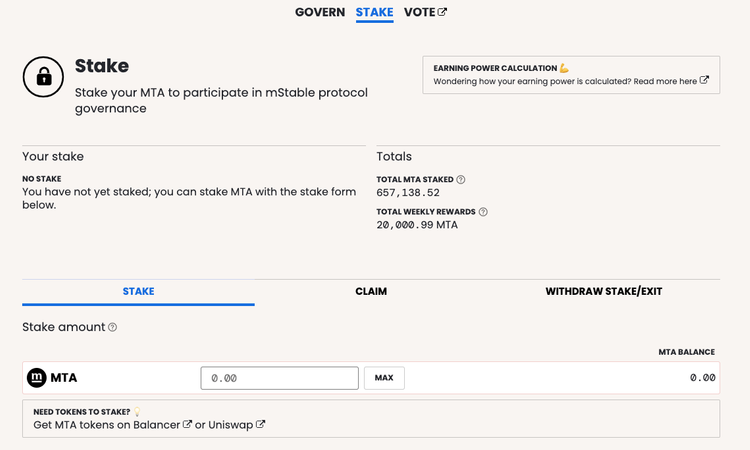 mStable has a vibrant community, with strong participation across different channels and highly-technical proposals going forward. The second stable asset will be released with mGold and the core team is looking forward to more integrations with other DeFi protocols in order to fully realize its potential. Grants of up to $50k have just been announced by the core team.

The mStable docs are a great place for any technically-minded user, trader, or developer to learn in-depth about mStable.

mStable is a protocol with an important mission. The team is highly involved and possesses strong technical skills and use best practices in blockchain and software development. We should see wider adoption of the $mUSD and other mASSETS coming in the future as users realize the possibilities of integrating the mStable protocol.

Excited about mStable? Anything this article missed? Reply below to let me know!